John Cafe was a silversmith based in London who specialised in candlesticks. He died in 1757 and was succeeded by his apprenticed brother William, who continued the production of candlesticks until 1772.

The William Cafe antique sterling silver candlesticks displayed on this page are made of cast silver. The other two types of candlesticks which collectors may find are either loaded or sheet silver. With very few exceptions, the best investment is cast (such as the Cafe candlesticks shown here) followed by sheet and then loaded silver.

It is easy to distinguish between the three types of candlestick because the sheet examples will be smooth inside and of even thickness, as well as being much lighter than the cast pieces. Cast candlesticks are only smooth at the centre (having been turned on a lathe) but otherwise the base is quite rough. It is also common for the hallmarks on cast silver candlesticks to be stamped on the rough silver underneath, such as shown on the examples below.

You can identify how antique candlesticks has been made by looking underneath. Loaded examples will most likely have a baize covered base or at least a piece of wood or metal plate. The reason for filling is to give support to the thin sheet silver which will either have been spun or stamped. If a sheet sterling silver candlestick is not loaded it will have been made from a comparitively thick gauge of silver.

Cast silver candlesticks started being produced at the beginning of the eighteenth century - up until that time they were primarily sheet silver. 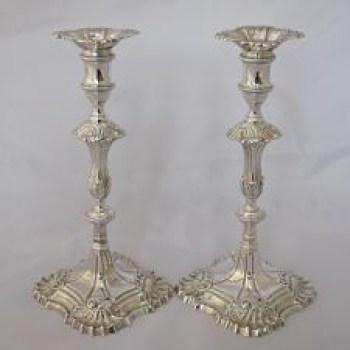